Jakarta: Although World No. 1 men’s doubles pair – Marcus Fernaldi Gideon/Kevin Sanjaya Sukamuljo will not be playing at the 2022 German Open that takes place in the city of Mulheim, Germany, from March 8 to March 13, the “Minions” are looking for a strong start of the season at the All England Championships.

Indonesia is sending a 22-players squad to the oldest badminton tournament in the world, which will be held at the Utilita Arena, Birmingham, England, from March 16 to March 20.

The Badminton Association of Indonesia (PBSI) published the 22-players list on Friday, in which Anthony Sinisuka Ginting (World No. 5), Jonatan Christie (World No. 8), Shesar Hiren Rhustavito (World No. 23), and Chico Aura Dwi (World No. 55) will be competing in the men’s singles event.

Meanwhile, the 2017 and 2018 All England champions – Marcus Fernaldi Gideon/Kevin Sanjaya Sukamuljo, will try to win their third All England title this year. They were accompanied by World No. 2 men’s pair Hendra Setiawan/Mohammad Ahsan, World No. 9 Fajar Alfian/Muhammad Rian Ardianto, alongside three other younger pairs – World No. 28 Leo Rolly Carnando/Daniel Marthin, World No. 22 Pramudya Kusumawardana/Yeremia Erich Yoche Rambitan, and World No. 29 Bagas Maulana/Muhammad Shohibul Fikri in the men’s doubles category.

Interestingly, in addition to sending players from the Indonesian national team, several Indonesian independent pairs including 2020 All England mixed doubles champions – Praveen Jordan/Melati Daeva Oktavianti who were dropped from the PBSI in its recent national team selection will also be competing at 2022 All England. Other independent pairs consist of Dejan Ferdinansyah/Gloria Emanuelle Widjaja, and Akbar Bintang Cahyono/Marsheilla Gischa Islami.

Before going to England, most of the Indonesian players will play their warm-up tournament at the German Open.

The following is the complete list of Indonesian players at the 2022 All England: 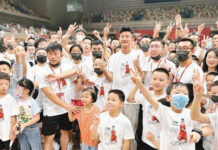